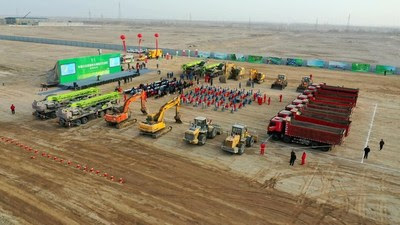 A concrete action of Sinopec’s pledge to support China’s “dual-carbon” goals and pursuance of green, low-carbon development, the Project is of great significance to promote the development of a green hydrogen industry chain as well as economic and social development in Xinjiang Uygur Autonomous Region, guarantee the energy security and carry forward the transformation and upgrading of the energy industry in China.

The Project is expected to be completed and put into operation in June 2023, and the green hydrogen produced by the plant will be supplied to Sinopec Tahe Refining & Chemical to replace the existing natural gas and fossil energy used in hydrogen production. The carbon dioxide emissions are estimated to be reduced by 485,000 tons a year, and the Project will contribute an average of US$20.4 million to the local GDP and generate US$2.82 million in tax revenue.

“Hydrogen energy is one of the sources of clean energy that has the most potential for development. This pilot project gives full play to Xinjiang’s advantage in its wealth of resources and is a key project for Sinopec to build a No.1 hydrogen energy company. It’s also a major strategic achievement for local-enterprise cooperation and is of great significance to promoting social and economic development in Xinjiang, advancing energy transformation, ensuring China’s energy security and supporting the sustainable development of the global economy,” said Ma Yongsheng, president of Sinopec.

In the meantime, all of the major equipment machineries and core materials used in the construction of the Project are manufactured in China, including the photovoltaic modules, the “heart” electrolyzer in water-electrolytic hydrogen production, hydrogen storage tanks and hydrogen pipelines, which is momentous for the rapid development of China’s hydrogen production equipment industry.

Focusing on achieving “dual carbon” goals, Sinopec has taken the lead in developing the green hydrogen industry and actively promotes the green and low-carbon development of the petrochemical industry. As the largest hydrogen producer in China, Sinopec is currently producing approximately 3.9 million tons of hydrogen per year and in terms of green hydrogen technology, Sinopec has applied its first self-developed PEM water electrolysis hydrogen production station.